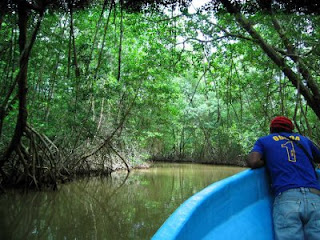 At most hotels in Mexico, the front desk hands over a TV remote control along with the room key. Television is very important here, and for many, that remote is probably as important as the room access. And the main genre is the telenovela. Soap operas with no subtlety and loads of camp, the music crescendos with every conflict, hyper-feminine and  deeply masculine voices mirror cartoon characters, and the wicked always get their comeuppance. I haven't turned on a set for ages, but things here have been entertaining nonetheless.
the drama within
In the empty beach town of Puerto Arista, I gave up on finding any non-seafood and tore into my last Tasty Bite. For the uninitiated, Tasty Bites are spicy MRE Indian dishes so yummy you don't even need to heat them up. They're excellent for car camping but especially useful as emergency travel sustenance for vegetarians. I'd been craving leafy vegetables for two weeks, and the lukewarm saag paneer (spinach with cubes of cheese) made me feel all warm and happy. Until it didn't.
A half hour after eating, I realized that my heart was going turbo on the autobahn. I laid down and tried to relax, but this all-important organ refused to slow down. After a while I remembered the stomach medication I'd taken earlier in the day, and started googling possible adverse reactions. The doctor had told me not to drink alcohol, and harrumphed that I needn't deny myself anything else. But guess what? Cheese happens to be a mammoth no-no with these cute red pills. For hours, my pulse ran a double marathon. Huge bombs of thunder jolted me awake in the early morning, and my chest continued to thump away like a dribbled basketball.
drama in other people's living rooms
Hanging out with exotic foreigners has social cachet in small let's-sit-and-stare-from-the-sidewalk towns. Still, I was surprised when a 20-something bike taxi driver I'd met earlier showed up at my hotel after dinner. He'd brought his wife, and they invited me to their house for coffee.
They pedaled me a few blocks away and I was ushered into large low room marked off with a red curtain. Seated on plastic chairs, the woman's family watched a blaring telenovela episode set at the beach. The actresses played with tumbling hair and somehow kept their plunging necklines from misaligning, while the men played goofy cuties or sexed-up lotharios. Everyone greeted me warmly, and I shook hands with the elders. Then my hosts and the rest of the family tuned back in for the bonfire and bikinis. I tried to engage by helping a teenager with his English homework, but he became too embarrassed, his nervous laughter escalating into manic high pitched squeals. He eventually corked it and stood one foot away from the television screen, staring intently and looking soothed. I fielded family status questions every so often, but mostly I just watched them watch TV.
drama at home
Back at my hotel, the night staff was now on duty. The youngish man sat on the end of a couch in front of the loud lobby TV, canoodling with his girlfriend. He looked up just long enough to verify that I posed no threat, then put his lips back in business. Determined to find a puff of unsecured wi-fi, I roamed around the cement hotel courtyard, my laptop a divining rod. Passing the lobby again, I noticed another woman sitting beside the couple. Moments later, a shriek: "WHAT ARE YOU DOING WITH MY HUSBAND?" It wasn't a cliffhanger in their cheesy telenovela, but a real live confrontation. A long silence hung before a woman sashayed past me out the back door. Screams and recriminations began.
With drama like this, who needs cable?