It's been a while since I've posted here, but Trump's Executive Order banning refugees, legal residents, and Muslims from the U.S. has my blood boiling. Has this country not learned anything?!

The following is a reprint from an article I wrote for the March 30, 2005 edition of the San Francisco Bay Guardian:

Speeding down scenic Highway 395, many drivers don’t notice much beyond the snow-covered vistas of Mount Whitney and its environs.  And the view is indeed breathtaking. But the land has also borne witness to an unsettling history. From 1942 to 1945, barbed wire and guard towers mounted with machine guns ringed a dusty square mile of Owens Valley, housing 11,000 Japanese American internees at the Manzanar War Relocation Center. Admittedly, visiting a former concentration camp doesn’t top many vacation wish lists.  Manzanar closed sixty years ago, but it remains a time capsule too chillingly important to ignore.

The bombing of Pearl Harbor set off a hysterical backlash against people of Japanese origin. Within two months, President Franklin D. Roosevelt approved Executive Order 9066, resulting in the wholesale removal of all Japanese Americans from the West Coast. On little more than a week’s notice, 120,000 people, two-thirds of them U.S. citizens, were forced to sell their homes and businesses at hastily arranged bargain basement prices. Their fates uncertain, they were transported to a dozen isolated “war relocation centers” scattered throughout the country.

During this period, Manzanar became the largest city between L.A. and Reno. Now tumbleweeds bounce across the windswept high desert plain, easily outnumbering cars and people. When the camp closed, the military sold off most of the buildings or gutted them for scrap.  The remaining landscape is shaped by absence and memory. At the sentry post entrance, brochures map out a self-guided auto tour. Row upon row of cement slab foundations stretch across the camp’s vast footprint, crisscrossed by a grid of now-empty roads. Shaded rock gardens and empty pond basins exude a curious tranquility, hinting at grace under pressure.

In 2004 a spacious $5.1 million interpretive center opened in the camp’s former high school auditorium. The names of the Manzanar detainees fill an entire wall inside, and a movie shows former residents recounting their experiences with relocation and racism. One area recreates a typical room in the flimsy tar paper barracks, including the invasive noise level from living in close quarters.  Newspaper clippings depict the virulent anti-Asian sentiment of the late 1800s, and there are displays of toys and furniture that residents created from scrap material.

There are personal testimonies, including that of Ralph Lazo, a 16-year old Mexican-Irish boy who felt so strongly about the injustice of the internment that he lied about his ethnicity in order to accompany his friends. Toyo Miyatake, a studio photographer, smuggled in a camera lens and eventually became the official camp photographer, although camp officials made him employ a white assistant to click the camera shutter.  Orphans of even partial Japanese ancestry were interned in Manzanar’s Children’s Village.

Touring the grounds, it’s hard to come to terms with the existence of overtly race-based prison camps in the United States.  Even harder to deny are the striking parallels between the discrimination against Japanese Americans after Pearl Harbor and the treatment of Arab and Muslim Americans after September 11. And the government’s admission of fault and reconciliation towards the Japanese American community has been slow.  In 1988, Congress formally apologized and authorized reparation payments, and in 1992, after decades of official neglect, Manzanar became the only former camp to win designation as a National Historic Site.

It wasn’t an easy journey.  The Los Angeles-based Manzanar Committee organizes a yearly camp pilgrimage, now in its 36th year.  “When we started, a number of local people didn’t want us here,” notes Sue Embrey, the Committee’s chair and a former Manzanar internee.  Although local opinion is now much more favorable, during discussions about preserving Manzanar’s wartime history, “there were daily letters of opposition to the newspaper, and the first superintendent received death threats.” The group spent years advocating for Manzanar’s historic site status, and its work with the National Park Service shaped the insightful content of the interpretation center.

A split-rail fence traces the border of the camp graveyard, casting sinuous shadows on the grassless ground. Hundreds of brightly-colored origami cranes, symbols of peace, festoon the fence posts. A brilliant white obelisk thrusts skyward, evoking the jagged snowy peaks just beyond. An inscription in Japanese reads “Monument to console the souls of the dead.” At the base of the marker lie empty china teacups, bottles of sake and unopened letters.

A comment book inside the interpretation center records the emotional reactions of visiting adults and children: How could this have happened here?  Why didn’t we know? During 2005, there are plans to reconstruct one of the guard towers that originally stood on the busy highway next to the camp, a provocative lure to those who might otherwise speed past and never ask.

IF YOU GO
Manzanar National Historic Site is on U.S. Highway 395 between the California towns of Independence and Lone Pine. The site itself is open dawn to dusk year-round, and interpretive center hours are generally 9am-5pm. Admission is free.

The 48th annual Manzanar Pilgrimage will take place on April 29, 2017.  The program reunites former internees, their families, and community members, and includes an interfaith ceremony and cultural performers.  Members of the public are welcome.  For more information, contact the Manzanar Committee. 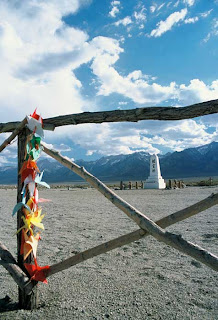 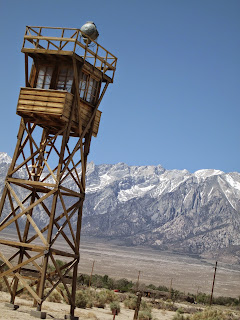